Please join Family Office Insights for this evening gathering on Thursday, September 13th 2018 from 12PM-2PM. If you care to join us, please email admin@familyofficeinsights.com.

Family Office Insights sits down with Kenneth Willardt of kargoe to discuss his pioneering social media platform that and Integrates the buying and selling of products with doing the right thing to positively change the world. 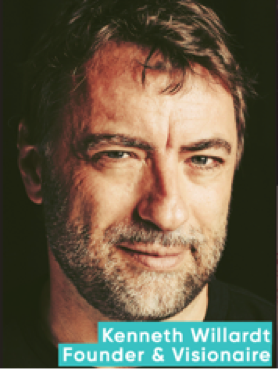 Tell us about your background and your company, kargoe.

My name is Kenneth Willardt, I’m from Denmark, I always wanted to be a photographer from the time I was 8-years old. After my photography education in Denmark, I moved to New York at age twenty to compete with the greatest photographers in the world and started my own photography business on my 24th Birthday. My first major campaign was a nationwide ad for Target, which ran on Times Square billboards for five years. Subsequently, I worked on the biggest and most successful campaigns in beauty for Garnier, Maybelline and L’Oreal. Over the twenty years of rebranding for L’Oreal, I also rebranded Maybelline for nine years. My photography and branding contributed to Maybelline’s bottom line as the organization grew from a $1 billion company to a $2.5 billion company. During that time, I photographed Maybelline’s advertisements exclusively worldwide, working closely with their celebrities, high-profile models, and commercial talent.

My work in advertising and photography allowed me to see problems within the industry, like the lack of support for digital workflow. As a solution, in 2002, I created a cloud based software LIVEEDIT, serving as a hub for communication, sharing, and collaboration in team-based media production. To this day, LIVEEDIT is used by major clients like MILK, Self Magazine, Vogue China, L’Oreal, Maybelline, and 3,000 photographers.

Now, I am addressing the problem within the social media world. The idea for kargoe emerged when my 7-year-old son Oskar approached me one Sunday morning sharing a newly made Instagram profile. Oskar said, “Daddy, why can I only ‘like’ things? Why can’t I buy anything?” This pain my son experienced sparked something in me - my drive and Vision to develop an App dedicated to social, viral, shopping with a purpose - ignited.

I became obsessed with answering Oskar’s question, and another, “Why shouldn’t you be compensated when you are creating this content for brands?” On kargoe, “being social” is sharing in the entire meaning of the term, “sharing economy” - people are sharing brands and products they love and tagging products in their posts. As a result, kargoers get paid for the value they bring to social media.

We also make these transactions possible instantaneously because shopping on kargoe is available directly in-app, within two clicks, solving the problem of abandoned checkouts in retail. We facilitate transactions through PayPal, which automatically splits payments between all parties involved (brand, endorser, kargoe). Users receive 3-15% of revenue when they are responsible for a sale.

Our 4th system that kicks in is the drop-shipment robot. It was developed for scalability. It enables us to allocate multiple orders into multiple retailers without someone having to do it manually. It automates the tracking process. This last system is various retailors and see that data into the logistics operators to offer a full view of tracking. We spent the last 4 years developing this system. While we were looking for funding, a potential investor introduced us to the eBay Accelerator Director. We spent 8 months at their headquarters and implemented our system into the eBay platform to be the first and current Latin American company to participate in this program. With them we turned our system using their technology and structure to grant Latin American consumers unrestricted access to eBay’s inventory. 25% of eBay’s inventory is available to Latin American markets when they log in from a foreign IP. This 25% is not considered the best inventory.

Our ideal target audiences are tech-savvy millennials, micro-influencers, and the 42% of Facebook users who have taken a break from the platform this year - nearly 1 billion people, making a strong case for a new social media platform to emerge. Facebook fatigue has become common among people who want to be compensated for their value. We speculate these people will also prefer to shop on a platform like kargoe, buying products and brands that their loved ones, friends or heroes wear instead of Amazon. Why shop from a tech titan when you could buy directly from your friends and support your community?

Millennial audiences also consist of socially conscious people who want to make a positive difference in the world. On kargoe, you can create a call to action when you post, whether it is telling your friends about the next big trend or raising awareness about charities or social issues to support on kargoe. kargoe empowers the next generation of leaders to share their perspective, being their authentic selves, while getting compensated for their value.

More and more each day, millennials want control of their data, and they want to be compensated for their value. Millennials do not trust big corporations that sell their personal information to earn a profit. It’s time these young content creators take the power back and have control over their data. It’s time all millennials have the opportunity to monetize their social media lifestyles as they are currently promoting brands for free.

Millennials on social media generally follow celebrities or influencers, but there are obstacles in the way of engagement. Millennials love these influencers’ style and want to see how they live their life. They may like an influencer’s outfit, but how do they know where to shop for their clothes? Do they look through the comments, try to find the brand, go to the website, or fill out the checkout process? No - millennials seek instant gratification, so 68% of sales are lost when this information is not readily available to shop and they are redirected to the “link in bio”. On kargoe, everyone you follow is an influencer you can easily engage.

Currently, influencers, models, and celebrities are the only ones getting paid for endorsements on social media and the ROI is not clear. These influencers receive a flat fee to post, but they cannot offer exact sales data. However, on kargoe, everyone knows the sales they drive with our “kargoelytics” feature, and brands can learn more about the effectiveness of their advertising spend.

kargoe’s key competitor is Instagram because the platform is also visual and starting to roll out shopping capabilities, but kargoe is different because:
1. Every kargoer will be empowered to endorse brands and products
○ Currently, influencers, models, and celebrities are the only ones getting paid for endorsements. On kargoe, millennials will monetize their social media lifestyles instead of promoting brands for free. We are allowing everyone, regardless of their current social popularity, to be micro-influencers for brands.
○ Affiliate programs that work through Instagram to pay influencers, like LiketoKnowIt and RewardStyle, have application processes that are complex and exclusive to people with large followings.
2. kargoe will not sell users’ data - kargoers will be compensated for their value
○ More and more each day, millennials want control of their data, and they want to be compensated for their value. Millennials do not trust big corporations that sell their personal information to earn a profit. It’s time these young content creators take the power back and have control over their data.
3. kargoers will receive compensation for their actions with cash and utility tokens
○ Utility tokens will reward kargoers for spending time with their social tribe on kargoe, liking posts, inviting friends, and buying or selling. Rewarding kargoers for the value they bring creates a win-win for all brands, shoppers, and endorsers.
4. kargoers shop from friends, not Amazon, creating a new economy
○ For example, if I am a young millennial without a lot of money, I can still have great style, endorse products, earn commission, and make money. kargoe is spearheading the beginning of a new economy for your friends and community, the people who influence you the most.

Doing the right thing is a trend that will never die. Why not sell something in style and have it also change our world by compensating the people that actually drive the sales? Why shouldn’t brands and social media platforms pay every individual for providing content and advertising?

The kargoe business model has the power to revolutionize both the social media and e-commerce landscape.

We are looking to raise between $3M and $10M. We believe we can achieve our vision when we have the right funding and partners. We have an excellent product, fully working and currently in beta. The capital would help fast-track our progress to prepare for our next level of growth. The minimum investment we are willing to accept is $250,000.

Investors who are well connected within their respective industries, who can open doors for partnerships, are ideal. We want to engage people to help drive our vision and bring strategic alignment with other like-minded people and organizations.

We just finished our whitepaper for a blockchain token we’re going to implement. These utility tokens will reward kargoers every time they engage with the app. Eventually, these tokens will build value and be used to shop.

Technologically, we are switching kargoe’s framework from Ionic to React, and we are optimizing the app so kargoe will operate faster. We are also launching a partnership with Shoppable, a technology that will connect kargoe with 28 million products available for purchase -- we will have nearly any product from all major brands and retailers available on kargoe. The Shoppable partnership will empower kargoers to find any product they love, endorse and post these products, and earn commission-based income.

We are also planning our first PR efforts now that the app will soon be ready for a hard launch. I plan to use my vast network of celebrities, models, and key players in fashion and media to promote kargoe at the forefront of social e-commerce, retail technology, and social media for the greater good.

Kenneth Willardt is a photographer from Denmark that has shot major advertising campaigns for the past 20+ years for the world’s leading brands, including Christian Dior, L’Oreal, Maybelline, Target, Olay, Garnier and Max Factor and a collection of editorial covers for powerhouses such as Vogue, Allure, Glamour, Cosmopolitan, GQ and InStyle.

Kenneth has worked with high profile celebrities of our time – JLo, Rihanna, Beyonce, Ariana Grande, Kendall and Kylie Jenner, Gigi and Bella Hadid and many more.

In 2004, Kenneth created LIVEEDIT, as a solution to the industry’s problem with the lack of efficiency in digital workflow. LIVEEDIT is a photo/video collaboration software used by a countless number of media companies and photographers.

In 2016, Kenneth began working on kargoe – the next social media revolution.

If you have any questions, please contact Kenneth at jenna@kargoe.com.