Please join Family Office Insights for this luncheon on Wednesday, February 28th at 12PM. If you care to join us, please email admin@familyofficeinsights.com.

Family Office Insights sits down with Misha Hanin and Curtis Dery to discuss Bit Power, a trusted cryptocurrency & blockchain ecosystem partner that delivers the most secured, intelligent, AI & ML-driven blockchain platform, which is deployed in dedicated data centers in North America, and connected to a private, secure, and dedicated worldwide Layer 2 network that is fully disconnected from the public Internet. Bit Power International is running a positive cash flow business and has raised over $1.5 million to date and is now seeking $20 million Series A to scale operations and continue market expansion. 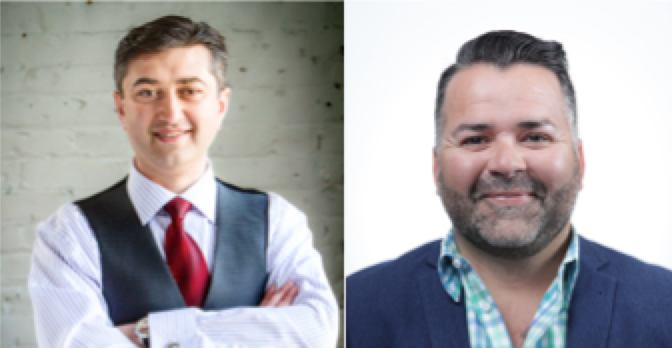 Tell us about your background and your company, Bit Power.

I started as an engineer in electronics at a very young age, building motherboards from scratch and exhibiting my work at engineering competitions. When I finished military service in Israel, I wanted to dive deeper into computer engineering and focus specifically on networking and security. I wanted to be on the right side of security practices, not the dark side, which is hacking. While in Israel, my profession was to locate security vulnerabilities, trap doors, in computing software and hardware. I became one of nearly 500 trained Microsoft Certified Masters (MCM) in the World during the 10 years existence of the MCM program. I also am a Microsoft Most Valuable Professional (MVP). This award is given to "exceptional, independent community leaders who share their passion, technical expertise, and real-world knowledge of Microsoft products with others”. I built my career around technology, and was working with big enterprises and consulting businesses for all of my life.

Twelve years ago, I moved from Israel to Canada because I decided that living in the cold is better than living in the desert heat, which was reminiscent of my military experience in Israel! In 2010, I began to work on an emerging field known as blockchain and cryptocurrency. This field was a perfect fit for me since it combined by expertise of security, cryptography, and computing, with a touch of business. Back in those days, I was one of the first people to build large-scale data centers focused solely on cryptocurrency mining. Now, with BitPower, I have shifted my focus towards developing blockchain security on public and private platforms to provide the highest degree of security and availability. BitPower started in mining to produce the necessary funds to accelerate our growth, but our true focus is on providing Blockchain as a Service (BaaS) and helping to bring ethical standards to this rapidly growing market segment. I believe that blockchain technologies will go down in the history books as being as big and as impactful as the invention of the Internet itself, maybe even larger.

My fundamental work ethic and early goal setting started to set in at age 17 when I became a journeyman welder. I was a lead welder in the airplane industry, but I realized that I had more ambition in me and that I desired to do more. My father was a security expert in IT and he pointed me in that direction, as it was a growing and booming segment in the market. I decided to go back to school to pursue a degree in computer network engineering, which I then transitioned into enterprise technical sales and began my career in IT sales with MTS and EPIC Information Solutions. After working under a union model for 5 years, I realized that this type of environment was not well suited for someone like me who wanted to work outside the box. Additionally, I wanted more exposure to sales, so I joined HP Canada as an Account Executive and drove data sales over 5 years, making President’s Club every year. I was also responsible for selling the first 3PAR store system in Canada. From there, I decided to pursue more senior roles in the private sector and became Vice President of Sales and Business Development at Powerland, a large consulting firm in Canada, which I helped grow from $13 million a year in revenue to over $100 million in revenue within a 5 year period.

As the IT industry began to pivot to the cloud the cloud, and then to cryptocurrency and blockchain, Misha Hanin, CEO of BitPower, and I created an enterprise architectural model that evolved into what BitPower is today. BitPower specializes in providing end-to-end, best of breed solutions focused on cryptocurrency mining and Blockchain as a Service (BaaS) offerings in order to deliver the most secure, private blockchain experience for customers where security, transactional integrity and ethical standards are of paramount importance. Misha and I met 12 years ago at a consulting company and became fast friends. Misha is a skilled technologist and businessperson with deep expertise in IT security, infrastructure, networking, and blockchain. Given that I am a specialist in enterprise sales, it was a match made in heaven.

Who is the target audience you are serving?

What are some of the challenges you face in your market?

The biggest challenge we see is that the blockchain and cryptocurrency marketplace is flooded with different spins and angles, as this is a very hyped industry. Despite the hype and rags to riches stories that are heard regarding Initial Coin Offerings (ICOs), we stuck to our guns and focused directly on building our proprietary blockchain platform. Given the nature of the industry and the potential financial gains that are in play, there are a lot of hackers in this space. Our technologies and our business behaviours are always focused on thinking one step ahead and innovating where other have not explored. It is a difference in mentality and we pride ourselves on being stewards of this technology and focus on evangelizing ethical practices within the blockchain industry. We believe that the current blockchain and cryptocurrency markets bare significant resemblance to the dot com era. Those companies who survived the burst of the dot com bubble are now multi-billion dollar business, while those who did not bring value, were wiped out. We believe that BitPower will be at the forefront of defining a new history in technology, with the staying power to be relevant for years to come. By focusing our efforts on building and democratizing access to blockchain technologies and securing our technology, BitPower and its investors will have the opportunity to reap significant rewards in this emerging industry.

How are you different from your key competitors?

Right now everyone is talking about blockchain and using open source. BitPower’s unique blockchain technology is built on a patent-pending platform which delivers the most secured, intelligent, AI & ML-driven blockchain ecosystem which is deployed on a dedicated data centers built and operated in North America, and connected to private, secure, worldwide Layer 2 network. By leveraging Bit Power International Inc.’s patent-pending vMiner™ technology, customers are able to take advantage of the most secure and stable blockchain experience in the marketplace. Implementing BitPower’s Blockchain as a Service™ (BaaS™), in conjunction with BitPower’s globally distributed, purpose-built, private blockchain network, introduces a 300% greater security model to support the utilization of blockchain in such sectors as Financial, Military, Government, or any other organization where blockchain security is of paramount importance. In addition, our team has an average of over 20 years in the enterprise IT and security space, working for such companies as Google, Equinix, Oracle, Pearson, Akamai, Netafim, etc.

BitPower is offering something that does not exist yet; Blockchain as a Service™ (BaaS™) on a separated network. All blockchains are currently distributed on the public Internet. This public Internet inherits all of the disease of the regular Internet like viruses, distributed denial of service attacks (DDOS), ransomware attacks, attacks from zombie miners, etc. BitPower segregates our services from those of the Internet, to provide a security focused, reliable, and “disease” free enterprise platform.

Due to the current lack of governance, there is a lot of exposure to unethical business practices like the pump and dump scenarios seen in the ICO markets. It is the lack of legitimacy and ethics that BitPower works to abolish. By subscribing to and evangelizing ethical blockchain™ practices and delivering best of breed, security and performance focused blockchain solutions, BitPower strives to deliver value not only to our investors, but to the industry as a whole. Those organizations and investors who have trusted in BitPower have done so because we provide full transparency as evidenced in who we are, what we do, our professional experiences, and our achievements throughout our entire lives.

How much are you looking to raise and who is your ideal investor?

Bit Power International is running a positive cash flow business and has raised over $1.5 million to date, carrying zero debt. We are now seeking $20 million in Series A to scale operations and continue market expansion. We want strategic investors that understand technology and bring value to the investment. We are big believers of bringing mutual value to each other.

To change the world one blockchain at a time by becoming the de facto choice in the industry for a flexible, yet secure, private global blockchain platform.

What's next for BitPower?

BitPower will continue to refine, enhance and bring to market its patent-pending secured blockchain network and services. We will also form the necessary strategic partnerships to help grow the business where appropriate.

Misha has more than 25 years of experience in the field of information technology, infrastructure analysis and design, implementing innovative and leading technologies for International companies around the globe in public and private sectors. Misha is one of nearly 500 trained Microsoft Certified Masters (MCM) in the World (during 10 years existence of MCM program). Misha is also a Microsoft Most Valuable Professional (MVP). This award is given to “exceptional, independent community leaders who share their passion, technical expertise, and real-world knowledge of Microsoft products with others”.

Misha has a winning track record in building businesses and bringing projects to operational and measurable success and is a well-rounded leader with experience across Business, Consulting and Technical evangelism.

Curtis Dery, the Chief Sales Officer of Bit Power International, Inc., is a driven and innovative business development and sales leader, with robust experience growing companies in the technology industry. In his most recent role, Curtis has proven track record of bringing explosive growth to one of the top IT Solutions Providers in Canada. Under Curtis’s leadership, the business grew from annual sales of $13 million to $110 million over a five year time period, with sales increasing by over 500%. Prior to that, Curtis was instrumental in taking HP Canada from $4 million in annual sales to $20 million. Curtis’s assertive, creative, and forward-thinking qualities, allow him to take a unique and fresh approach to standard ways of doing business, and seeing opportunities that others have overlooked. Curtis’s success is tied to taking initiative, and a human approach to business – understanding that ultimately, people buy from people.

If you have any questions, please contact Tad Einstein, CTO, at tad.einstein@bitpower.ca.