OCEARCH is a U.S.-based nonprofit, independent research and education organization whose mission is to accelerate the ocean’s return to balance and abundance, through fearless innovations in scientific research, education, outreach, and policy, using unique collaborations of individuals and organizations in the U.S. and abroad. Since 1846, the powerful movement of the ocean has inspired Ulysse Nardin in its singular quest: the constant innovation of mechanical timepieces. Two brands inspired by the majesty of the seas and built on the foundation of perpetual innovation, OCEARCH and Ulysse Nardin have joined forces to inspire and further research of our ocean’s most misunderstood inhabitant: the great white shark. You too will be inspired to join the mission and live in the biggest room in the world.

I am are pleased to announce that I will donate $5.00 for each registrant that attends the webinar. If you would like to get in my pocket for $5.00 bucks, bring it on, and invite your ocean loving friends.

Also, one attendee will be selected to join me for an Ocearch expedition on the Ocearch research vessel. 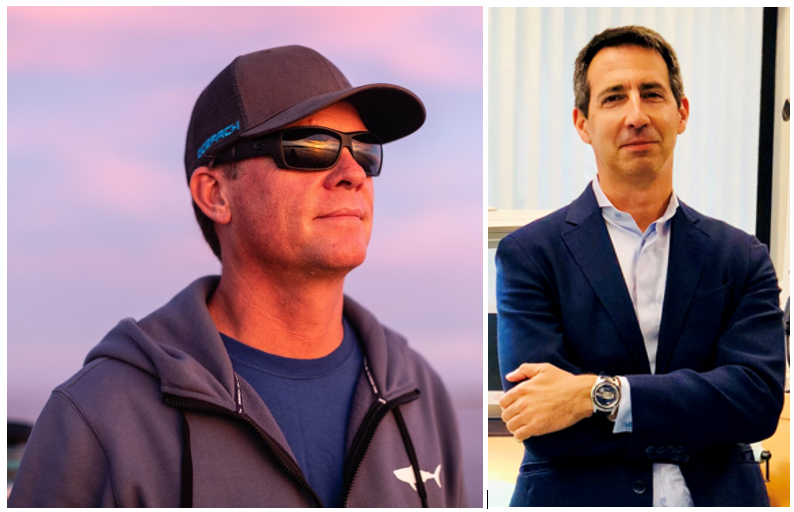 Chris Fischer leads his life through the guiding principle of doing good for the world and including the world in the work. A full-time explorer, Fischer has a special gift of seeing the “big picture,” creating solutions around that picture, and communicating that picture in an accessible way to others.

An explorer and disruptor, Chris has led 37 global expeditions focused on accelerating the ocean’s return to balance and abundance, by unlocking the life history puzzle of white sharks and other keystone species through expeditions aboard the OCEARCH.

A serial entrepreneur, Fischer’s collaborative vision for OCEARCH connects the practical (expert fishermen) with the academic (researchers). By connecting multi-disciplinary experts, OCEARCH is able to gather information about a white shark’s migrations, reproductive condition and cycle, genetic status, diet, inorganic and organic contaminant loads, fecundity, parasite species presence, abundance, and infection sites, all in a short 15 minutes. This approach drastically reduces the time and data deficit that has long existed for large marine animals in the field of research and directly addresses the environmental policy paradox for ocean ecology. Since founding OCEARCH in 2007, Fischer’s team has: engaged with more than 190 researchers from global institutions; safely tagged more than 400 animals; advanced science through 54 peer reviewed papers; and, worked globally with partners across varying sectors.

Fischer’s approach completely disrupts the research and policy process by making data collection and distribution collaborative, inclusive and open-sourced. This data-centric approach has inspired global ocean environmental protection policies, with Fischer working alongside Presidents of several countries, including the U.S.

In the spirit of including a global audience in his work, the OCEARCH TRACKER launched in 2013, allowing nearly 2 million annual users to learn about sharks while tracking them across the planet in near-real-time. Further, a STEM curriculum based on the Tracker contains more than 100 lesson plans is made available through ocearch.org.

Fischer began his career as an explorer as host of the four-time Emmy Award-winning “Offshore Adventures” from 2001 to 2009. It was the #1 watched outdoor TV series and had the goal of pouring the oceans back into people’s lives. From 2009 to 2012, Fischer hosted 20 hours of TV episodes on National Geographic Channel and 10 hours on the History Channel, chronicling the research on the white shark.

Fischer’s work through OCEARCH is supported through socially innovative partnerships with Costa Sunglasses, SeaWorld, YETI Coolers, Jefferson’s Bourbon, Cisco Brewery, Jacksonville University, and the support of fans across the globe.

A graduate of Indiana University, Fischer continually explores the world alongside his wonderful family and crew.

French-born François-Xavier holds degrees in political science and economics from universities in Bordeaux and Paris. He is also an active alumni of Harvard Business School.

François-Xavier spent the first fifteen years of his career in Russia, successfully working in different industries, including FMCG and luxury. For the past ten years, he has worked for the LVMH Group: first, as General Manager for TAG Heuer Russia, where he transformed the once unknown brand into a market leader (a position it still holds today). He was then recruited by Parfums Christian Dior as GM Russia, and relocated to Paris headquarters in 2015 as Commercial Director, Europe.

François-Xavier was handpicked by Ulysse Nardin CEO Patrick Pruniaux, not only because of their collaborative history together at Tag Heuer, but because François-Xavier has a proven track record in successful brand building.

“I am excited to return to the watch industry, especially with a manufacture such as Ulysse Nardin that has a rich history of innovation and a unique spirit,” says François-Xavier. “I know we have much to look forward to with Patrick as CEO, and I am eager to be a part of such a singular moment for the brand.”

François-Xavier is based between NYC and Florida and reports directly to Patrick. As President of the Americas his work will also include the Latin American market. In both his professional and personal life François-Xavier has traveled extensively in these regions and is eager to continue doing so in his new role.

“Consumer behavior and shopping trends have changed extensively – both in brick and mortar, and on the digital side,” notes François-Xavier. “Maintaining the brand’s agility and using a retail-oriented approach are integral to the US market. Our focus is on the essentials: a limited, authorized distribution network, strong support to our trusted retail partners, and marketing that emphasizes the brand’s compelling heritage and quest for innovation.”

François-Xavier is deeply passionate about communicating Ulysse Nardin’s marine heritage and its long-standing relationship with the US Navy. With a personal history immersed in the military – his father is a Major General in the French Armed Forces (RET; Legion of Honor, US Legion of Merit), while his sister works for the American Battle Monuments Commission in the Normandy Cemetery – he is enthusiastic about the brand’s future, as well as the incomparable story of its past.

In his free time, François-Xavier is an avid outdoorsman, sailor and hiker. A frequent guest lecturer at top universities, upcoming engagements include Boston University and FIT New York.